Today, is International Day of Peace, first observed in 1982 and sometimes unofficially referred to as World Peace Day. It is a day that is recognised globally, as a time to cease fire – whether personally or politically. 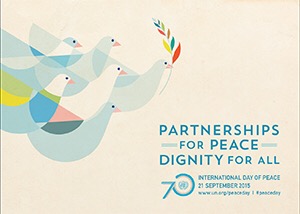 The theme of this year’s commemoration is: “Partnerships for Peace – Dignity for All” which aims to highlight the importance of all segments of society to work together to strive for peace.

Today we would like to celebrate Skateistan, a program we follow closely across its platforms. Situated in Kabul, a city ravaged by ongoing wars lies an important program of the children of Afghanistan.

With over 40% of its students being female, learning and skating at the school each week, Skateistan really is a one of a kind program for Kabul and skaters worldwide.

In 2013 Skateistan won the award for “Peace and Sport” – Over 5,000 people voted to elect the winning image (pictured below) which got nearly 60% of the total votes!

Joel Bouzou, President and Founder of Peace and Sport, announced: “This picture is particularly outstanding. It tells us better than a thousand words that sport is a universal language understood by children around the world, capable of building bridges for understanding and friendship between peoples...”

He stated that this photo shows how skateboarding, “acts as a genuine vehicle for peace education, as well as encouraging gender equality and inter-cultural understanding in Afghanistan.”

In the true spirit of Peace Day, events at Skateistan give students a chance to interact, forge new friendships, and promote peace, tolerance, and respect for children all over the world.

These amazing organizations have used skating as an empowerment tool to reaching out to young Afghan youths, breaking social barriers and educating them on making decisions on issues that affect them.

Our thoughts today are also with the current humanitarian crisis and refugees fleeing the war torn Syria. Millions of people have walked hundreds of miles, travelled across land and water in hope to place their families in safer surroundings.

We are incredibly lucky simply to live where we do and mustn’t take our comparatively peaceful lives for granted.

So, as The United Nations invites ALL nations and people to honour a cessation of hostilities during the Day, we also ask you to forget all of your quabbles and set aside your differences amongst your family, friends or work colleagues for one day.

Who will you make Peace with today?

For more information on Skateistan check out their website http://www.skateistan.org

And to donate to the Syrian child refugees, http://www.savethechildren.org.uk/about-us/emergencies/syria-appeal&nbsp;