Shelley Yates goes to the operating table this Sunday, at long last. And whilst we’re sad that she’s going to be on the injury bench for the entire summer, we are pretty stoked that it’s finally going forward and that she can start her recovery phase… then get back to shredding at full throttle!

We caught up with Shell this week to see how she’s feeling, read more below…

“So, the day is nearly here… my ACL replacement surgery is Sunday eeekkk. I’ve been waiting for this surgery since January from a long term injury that happened originally 5 years ago.

I was skating my local (Jackson’s skatepark in Rochester, Kent) when a BMXer dropped in at the same time and went straight into me, I fell to my knee twisting it and snapping my ligament. This caused me to stopped skating for around 4 years, I used to have a roll around now and again but nothing serious.

Just over a year ago I picked my board up again and haven’t put it down since. Skating is more than a sport or a hobby to me, it’s my medicine that keeps me happy and fit. The doctors didn’t pick up on my torn ligament for years and I kept rolling and dislocating it, causing more problems.

When I skate I always wear a brace, but due to skating being a high impact sport, I have dislocated my knee even with the brace on and it now gives way when I walk.. so it’s time to get it fixed!

This means I have to hang up my skateboard for a minimum of 6 month, which is going to be hard for me because I pretty much skate every day. However, if I want to walk when I’m older then I need to get it fixed now.

“So kids don’t let injuries be ignored, rest fully when you’re asked but always come back to skating” 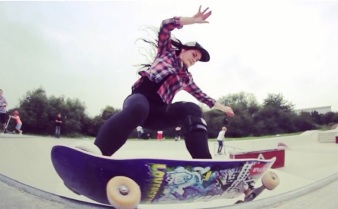 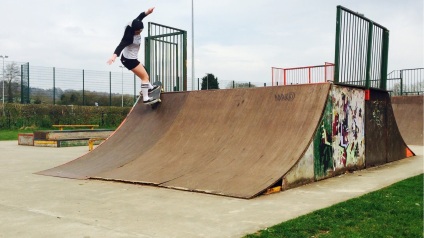 Huge thanks and shout out to Danni for pushing me to try new things and arranging the best girls events this year, I’ve never skated with as many girls and it’s been awesome.

Big shout out the Harlow boys, since September we have skated our butts off and got some rad footage, such a rad bunch of boys.

If you haven’t been to Revolution skate park in Broadstairs then go, the best bunch of boys around who are not only rad skaters but funny as hell, the park is amazing with a great atmosphere.

Finally a big shout out to everyone who I have skated with this year, I’ve never been more injured but never had as much fun… watch out October when I’m back skating stronger than ever.