Last week I jetted out to Israel to work with SkatePAL, a charity who for the last three years have been building skateparks and teaching children to skateboard in the Palestinian Territories.

Charlie Davis, a skateboarder from Edinburgh, set up the charity. He was teaching English in Palestine and would go out on his board after work. Local children were fascinated by what he was doing, and so he came up with the idea of introducing skateparks and skateboarding practice within Palestine. This year Charlie and around 20 volunteers from all over the world are working together to design, build and teach skateboarding in Asira Al-Shamalyia, near Nablus.

Alongside me, there is one other girl skater involved, who is also from the UK: London/North Wales-based skater, Lilly Hein-Hartmann. We’ve been sharing a flat together and we’re looking forward to teaching skating, particularly to some of the girls in the town. I’ve put together a short edit of the build so far, which features an interview with Lilly talking about the project, and over the coming weeks I’ll be posting updates here on Girl Skate UK.

This first week has been both difficult and wonderful. The building work is a little behind schedule, so we are spending most of our time at the site, trying to get it finished. Back in the UK, I work as a lecturer at Sheffield Hallam University, so being on a building site is really different to my ordinary job, but I’ve developed a newfound love/hate relationship with cement.

Most of the volunteers here have never built a skatepark before, so we’re learning from the more experienced builders as we go along. Everyone is putting their heart and soul into the work, so despite us being made up of mostly amateur and first-time builders, the obstacles that have been built so far are looking really good. 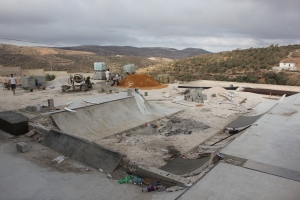 Reactions from the local people of Asira have been overwhelmingly positive; people are very friendly and welcoming. It actually takes a lot longer than it should to walk from one end of town to another because so many people are keen to stop and chat with us, and to offer coffee and food.

The site we are working on is located a few minutes drive from the centre of town (accessed on foot – or board – down some fun, but scarily steep hills). It’s in the most beautiful spot with a tremendous view of the hills and olive trees all around. Local people turn up throughout the day to have a look at what we’re doing and to bring us bags of cold drinks, food and sweet things to keep us going.

Between Thursday and Sunday last week it was Eid, and so we took some time off to visit the skatepark in Jerusalem and stayed over for the night in Ramallah before heading back to work. Whilst we were in Ramallah, we met up with Abdullah, one of the skaters who features on Epicly Palestine’d: The Birth of Skateboarding in the West Bank, and before leaving on Saturday we skated the central square in the city; a smooth stone plaza with steps and ledges.

Getting girls involved in the project is going to be a bit of a challenge, because the social framework here is one in which women and girls tend to occupy the private space of the home. There is quite of lot of gender separation in social contexts, and it will be tricky to establish a regular slot of time for girls to use the park, but we’re hopeful and excited to begin that process and to start to get girls skating in Asira.

Skateboarders of any level of proficiency are needed throughout the year to help out with teaching and building through SkatePAL. If you’re interested in volunteering with SkatePAL, get in touch with Charlie at: info@skatepal.co.uk

One thought on “SkatePAL and girl skating in Palestine”